The problem here appears to be that the code in tcmemcpy.c under x86 and x86_64 relies on some inline assembly features not supported by all compiler/assemblers. Namely, the use of 0b (binary immediate) operands in assembly instructions is not apparently supported during compilation under Apple gcc and gcc-4.2.

Setting the CCAS flag did not seem to help. A quick fix, then, is to convert all binary immediates in the asm instructions to hex or decimal.

Once these operands are modified, the compiler should no longer complain about invalid immediate expressions.

In any case, the latest CVS version of transcode should have resolved these problems already. The workaround should only be necessary if you still must compile the release tarball for 1.0.5.

Updated: There is a second potential problem if you were using ffmpeg-SVN and transcode 1.0.5, in which its hard-coded include lookup for avcodec.h always looks for ffmpeg/avcodec.h. The SVN version of ffmpeg has moved these headers to libavcodec/avcodec.h. A path patch for transcode 1.0.5 and ffmpeg is available, which basically boils down to changing the #include headers and the configure.in file to look for the new path.

Updated: A third problem has now cropped up, with the ffmpeg API change that moved AVCodecContext’s bits_per_sample to bits_per_coded_sample. A global search and replace seems to work for now. See this also in my post on compiling Perian. 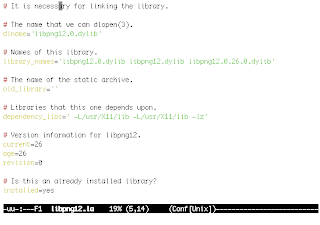 If you’ve been having problems compiling various Unix packages on OS X 10.5.4, and that your compile run fails mysteriously with something like:

One strange yet very likely explanation: your libtool archive file /usr/X11/lib/libpng12.la is lying about the location of the shared library for libpng12 — namely, that a file called /usr/X11/lib/libpng12.0.26.0.dylib exists and should be used for linking against libpng12. However, if you actually look in /usr/X11/lib, no such file exists – perhaps you might have libpng.0.24.0.dylib, but not .26. Therefore, packages that make use of this incorrect libtool archive metadata are suitably confused, causing the compiler to bail out when trying to link against this non-existent file.

Since libtool archive (.la) files are text-based, you can open it up in emacs. The quick and dirty fix to this is to simply change the offending library_names and the current and age properties to the correct numbers. In my case, the libpng sitting in /usr/X11/lib was .24, and so I string-replaced all the values in those three properties from 26 to 24. The compilation then proceeded normally.

The long term solution, of course, is to track down what put a wrong .la file there in the first place. I suspect Xcode 3.1 and Mac OS X SDK 10.5, which shipped with the latest iPhone SDK.

UPDATED 9/8/2008:
In the comments section, I’ve been informed that the X11SDK package in Xcode 3.1 in the culprit. Thanks Anonymous!