There appears to be a porting utility for converting extensions from other browsers.

They even have a listing of what the boilerplate files do, as I had below for App Extensions.  That is definitely progress in terms of documentation writing.

I have not had a chance to play with the new API.  But hopefully the new API is standard and more JS-focused than this current hybrid system.  The native app extension appears to still be around, but I’m not clear what role it plays right now.

In any case, if you can afford to target Safari 14 only, I would hold off on making new App Extensions.  Using the webExtension standard would make everything much easier to maintain, and it is unclear for how long Apple would maintain the app extension model now that webExtensions exist.

With the release of Safari 12 and macOS Mojave, Safari has taken a separate path from every other browser in terms of extension support, by creating a new “Safari app extension” model and deprecating old Javascript-based extensions. Like Google Chrome, Mozilla Firefox, and Microsoft Edge, old style extensions have been deactivated (with a scary and very disingenuous warning message that legacy extensions are “unsafe”). However, while all other browsers have moved to support the growing WebExtensions standard, making browser extensions easy to generate across browser platforms. Safari is using its own weird and different extension model for its new Safari App Extension system where:

The implication, therefore, is that it is no longer enough to be a Javascript dev to make a Safari extension.  You’d also have to be a competent Swift / ObjC developer, in addition to being a competent JS developer.  In my experience, the result of the set intersection of {Swift devs, JS devs} is quite small.

In any case, leaving aside my personal opinion about this extension system and its undoubtedly negative effects on the already dwindling Safari extension ecosystem, this document constitutes my notes on porting a traditional JS-based Safari Extension to a Safari App Extension.

Disclaimer: These notes are now updated for Safari 13 and XCode 11. Future versions may drastically change the extension model, and I may or may not update this document as things change. Corrections and constructive suggestions welcome in the comments.

How to create a Safari app extension

In the good old days, you went into Safari’s Develop menu and hit Show Extension Builder. In the brave new world of Safari App Extensions, extensions are made in Xcode, Apple’s all-purpose IDE.

Starting in Xcode 10.1, Apple has made it slightly less troublesome. In New Project, you can select “Safari Extension App” directly as one of the project templates. 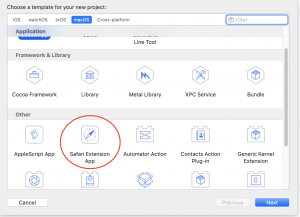 This does the exact same thing as the manual process in Xcode 10.0. It creates 2 targets:

If for some reason you are still using Xcode 10.0, you have to make a generic Cocoa macOS app, then File -> New -> Target and pick Safari Extension from the list of app extension targets.  This also applies if you want to add an Extension target to an app project that was already made.

What are all these boilerplate files

The templates for the containing app are largely irrelevant for stand-alone Safari Extensions. For me, I am building Safari extensions that stand on their own. If you are building an app that happens to offer a Safari extension as a side effect, that purpose is out of scope for this document, but you may find something useful in here for building the extension itself.

The meat of a Safari App Extension lives in the extension target. I am using an Objective-C project in these examples, but the Swift project looks very similar. 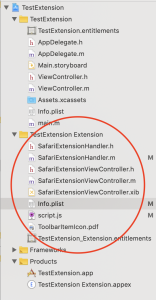 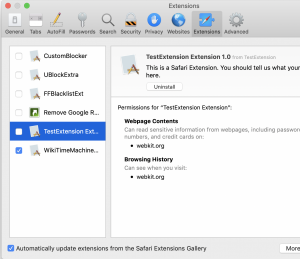 During development, you can instead run the App Extension target itself, by switching the scheme from the XCode toolbar. 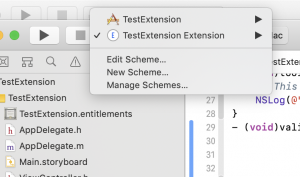 If you run the App Extension itself, a menu pops up asking for which browser to run it with (which can be Safari Technology Preview as well). It will then temporarily install the extension for the duration of the debug session. If run this way, you can also see any NSLog debugging print statements in XCode’s console, as well as use the built-in debugger to step through native code.

Legacy Safari extensions were pure Javascript code, split into a global.html page that ran in the background in its own context, and injected script files that were injected into the context of every accessible web page. Only global.html/global.js could interact with the larger Safari extension environment, and only the injected scripts could interact with the currently loaded web pages. These two separate worlds communicated with each other using message dispatches – global.html/global.js would push data to the injected scripts through safari.application.activeBrowserWindow.activeTab.page.dispatchMessage, while listening on safari.application.addEventListener for any messages coming back. Injected scripts would push data to the global page using the tab proxy safari.self.tab.dispatchMessage, and listen to messages from the global page using safari.self.addEventListener.

Safari App Extensions have a similar architecture. However, it has torn out the global.js/global.html portion of this, and replaced it with native code implemented in SafariExtensionHandler.

Do I really have to port all my global.js / background.js Javascript code to Swift / Objective-C?

As a test, I made a small Safari app extension using a fairly trivial global.js. The idea is that we embed a WKWebview instance inside the app extension, and have that WKWebview view act as a bridge between the old global.js and the new content script. The WKWebview loads the old global.html file, and shuttles calls from the injected script to the JS inside itself using evaluateJavascript, and then dispatches the evaluated results back to the content script.

For a trivial example, this approach seems to work — though I have not tested it extensively. I imagine for complex use cases though, the time spent re-building global.js to work inside a WKWebview is about the same (or more) than just rewriting it in Objective-C or Swift.

In legacy Safari extensions, the extension builder had a nice UI to add scripts and stylesheets for injection. For app extensions, plist XML will have to be specified manually (or using the built-in plist editor in Xcode) 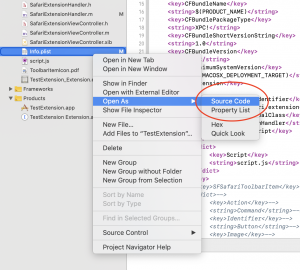 By using Open As -> Source Code, you can edit the XML directly if messing around with plist editor is not your thing. However, plists are a specific format, with arrays and dict representations that are annoying to write raw XML with, if not using a plist-aware editor.

Context menus have only changed a little from the legacy Safari extension architecture. You still specify context menus in the Info.plist, and they still interact largely the same way as in legacy extensions. 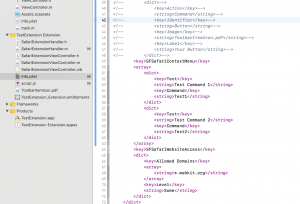 In SafariExtensionHandler, implementing the validateContextMenuItemWithCommand method will let the extension decide whether to show or hide a context menu item, and whether to change its menu text depending on conditions.

As it suggests, validationHandler returns NO for shouldHide if the menu item should be displayed, or YES if it should be hidden. The text parameter allows for the menu text to be changed dynamically during validation.

What if we need to change which menu to show depending on if something exists on the web page or not? In the injected content script, listening to the “contextmenu” event and implementing a handler will allow you to populate userInfo dictionary with data, and validateContextMenuItemWithCommand will be called with that data.

The code is again very similar to how validation is done.

The toolbar button can be configured to trigger one of two actions: Command which invokes a command immediately, or Popover which creates the popover view as provided by SafariExtensionViewController. The “menu” action that legacy Safari Extensions had, which simply created a menu of commands to choose from, has been removed. See the guide on Toolbar Item Keys.

To respond to a toolbar button click, implement - (void)toolbarItemClickedInWindow:(SFSafariWindow *)window in SafariExtensionHandler.

To show a popover on click, implement - (SFSafariExtensionViewController *)popoverViewController. This should be part of the boilerplate code generated by XCode.

Popovers are no longer HTML pages. They are now native AppKit views, created the same way as any macOS app’s views; legacy popovers would have to be ported to native code, or hacked using a WebView. The UI controls available to the popover are native macOS controls (NSButton, NSTextField, etc.), and must be created and styled using Interface Builder (or programmatically). These UI elements can be wired up to the SafariExtensionViewController singleton, which can provide the delegate methods to respond as the controls are changed.

Converting a Legacy Safari Extension to a Safari App Extension — As of the time of this post, there is a heading in this brief Apple document called “Convert Legacy Safari Extensions Automatically”. You might imagine that this implies there is some kind of tool that automatically converts legacy extensions into app extensions, but this is not the case. That section actually describes how you can uninstall a previous legacy Safari extension in favor of an updated app extension (that you still have to write, yourself, manually). So the “two options” that they mention is actually just one option, with a preface of how to remove a previous version of the extension written in legacy/JS form.