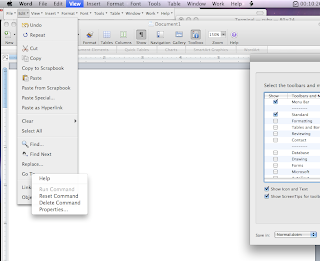 Pierre Igot over at Betalogue writes of a way to reassign the keyboard shortcut for the “Find Next” command in Word 2008.

This has bothered me for a very long time. In essence, Office 2008 maps Command-G, the customary Mac OS keyboard shortcut for “Find Next” (in essence, to find the next instance of a string match and part of the set of standard Find/Replace [All] functions in any good text editor / word processor), to “Go To”.

To its credit, Word allows customization of its keyboard shortcuts. Unfortunately, I just could not locate the “FindNext” keyboard shortcut in Tools -> Customize Keyboard to apply customizations to. Turns out it’s actually named “RepeatFind”, as opposed to “EditFindNext”, which you’d expect when the “Find…” command is simply “EditFind”.

Further, it turns out that wouldn’t have mattered anyway. Microsoft overrides the keyboard shortcut selection behavior in View -> Customize Toolbars and Menus. It does so in a ridiculously arcane way, by which the menu name “&Go To” fixes the shortcut key to Command-G. Therefore, no matter what shortcut is set in Customize Keyboard, Command-G will always map to Go To and not Find Next. ARGH.

Even knowing this, it was not obvious how to edit the name either (screenshot). Apparently the solution is to use the fake menu bars that pop up after selecting Customize Toolbars and Menus, and then right-click or Control-click the Go To menu item. That will pop up an edit box with the name of the menu item, at which point you can remove the gratuitous &, such that Command-G will map correctly based on Customize Keyboard.